“What kind of youngster is he?”

“Very firm. He sat for an hour without changing his posture. He took only one drink at the very beginning, likely for the sake of courtesy and hasn’t done so since. On his first drink, he merely touched the cup with his lip. It seems like he isn’t acting with restraint but rather, he is acting with caution. He shows deep thoughts, an alert mind and possibly even a degree of animosity.”

“He seems to be a smart person, at the very least, not stupid…how old is he?”

“I also remember that he should be around that age.”

“Yet his maturity makes him seem older than he really is.”

“Yes…his presence of Qi is ordinary. He hasn’t even experienced Purification. Though we can’t tell his potential, he is already fourteen, so even if he starts cultivating from the start again, it is unlikely that he will have a bright future ahead of him.”

“Even if he has a bright future, how can he compare to the disciple of the Longevity Sect’s headmaster?”

“Madam, is that marriage contract real?”

“The authenticating object is real so the marriage contract is real.”

“How could the Elderly Master had…..arranged such a marriage for the young Lady?”

“If the Elderly Master had not died, maybe you would be able to obtain the answer …. open the door, I am going to see him.”

Along with a sound, the door slowly opened. The sun shone into the room and lit up all the corners, alongside the Madam’s pretty face and the half piece of jade pendant in her hand. The nanny who spoke to her before, stood in the corner and was entirely hidden by the shade. It took some effort to see her.

With the nanny’s support, the Madam walked towards the outside of the room. She walked slowly like a thin willow whisked by the wind. The expensive gold hair clip in her hair and the pendant on her clothes did not make any sound which appeared to be somewhat strange.

The yard was very dark. On the gr*land, there was a tree so huge that even ten people couldn’t encircle it. At the two sides of the road, there were no maids or servants. Far away though, faintly, you could see people kneeling down. The atmosphere around the place was very heavy, like the cold weapons exhibited in the parlor.

The Master of this estate is the great Zhou Dynasty’s well accomplished Divine General of the Eastern Decree, Xu Shi Ji. The Divine General managed the estate like he did his troops. The estate had always been quiet and serious and because of the event that occurred today, all of the maids and servants were driven out to a side yard. The atmosphere on the estate was depressing. Even the spring wind blowing from the outside seemed to be frozen.

Madam Xu p*ed through the courtyard and arrived at the side yard. With her eyebrows slightly stirred up, she stopped to look at the youngster in the room,

That youngster wore a really old Taoist robe that had lost its color due to overwashing. He had a soft and immature face, upright eyebrows, and bright eyes, showing an inexpressible temperament that seemed as if he could see the truth of many things.

The youngster put his luggage aside. The luggage looked really ordinary but at the same time it was well organized. Not even a speck of dirt could be found; even the hat tied on the luggage was very clean.

What made Madam Xu cautious and annoyed by this, was the fact that the tea on the table was now cold, yet the youngster still kept a calm expression. She couldn’t see any irritation on his face, which suggested this youngster possessed patience that people at his age didn’t normally have.

This would be a really hard person to deal with.

Fortunately, most people like him were usually very arrogant.

After he entered the Divine General’s Estate and conversed with the nanny for a few minutes, no one bothered him. After sitting in the room for an hour, he was inevitably bored. But Chen Chang Sheng was used to boredom when he was a child, therefore he was able to stand the boredom.

Silently he spent his time memorizing the sixth chapter of Hua Ting Scripture word by word. He was waiting for someone with authority to arrive so he can hand back the marriage vow to the Divine General’s family. After completing this task, he had a lot of personal matters to attend to.

He took a sip of the tea to moisten his dried lips. He wasn’t careful or suspicious like how the nanny thought he was. He just thought it would be impolite to use the bathroom as a guest in someone else’s house after drinking too much water. In addition, although the cups at the Divine General’s Estate were all luxurious china, he wasn’t used to drinking from someone else’s cup.

(TL Note: luxurious china means that the plates and cups were made out of gl* and are high priced/quality)

He has a bit of OCD regarding using other people’s things.

He stood up and bowed toward the well dressed lady. He guessed that she was probably Madam Xu of the Divine General’s Estate. He thought he could finally finish this business and move on. Chen Chang Sheng reached into his pocket and prepared to take out the marriage vow.

Madam Xu stopped him in a relaxed and non-urgent manner. She sat down on a seat and accepted the tea from a maid. She looked at him and calmly said . “Did you visit the Mausoleum of Books? What about the Nai He Bridge? The sight of ivy at the Imperial Palace is also beautiful.”

Chen Shang Sheng thought it was Madam Xu’s polite way of starting the conversation, but he didn’t think it was necessary to chat. But because an older person was talking, he couldn’t be disrespectful. He answered in a simple manner, “I haven’t yet. I’ll go see them in the future.”

Madam Xu’s hand that held the tea cup stopped in mid air, “So basically, after arriving to the Capital, the first thing you did was come to the Divine General’s Estate?”

Madam Xu raised her head and gave him a cold look. She thought to herself, a poor youngster from the countryside wasn’t attracted by the fancy sights of the Capital and rushed straight to the Divine General’s Estate to talk about marriage. It’s funny how he was in such a hurry.

Chen Chang Sheng didn’t know why Madam Xu replied “Is that so”. He stood up and reached into his pocket once again, wanting to give back the marriage vow. Since he decided to do so, he didn’t want to waste anymore time.

But his action caused another misunderstanding. Madam Xu looked at him and her eyes turned colder, “I do not accept this marriage, even if you take out the marriage vow, it is of no use.”

Chen Chang Sheng didn’t expect to hear this, he was stunned for a moment.

“The Elderly Master was saved by your Master and thus, settled this marriage…… It seems to be a fancy tale?”

Madam Xu looked at him and continued coldly, “But it is nothing more than just a tale, a drama. It can’t happen in real life. Who would believe this?”

Chen Chang Sheng wanted to explain that his intention was to forfeit the marriage. But after hearing these insulting words and seeing the disdainful expression on Madam Xu’s face, he couldn’t open his mouth. His hand was still in his pocket, touching the marriage vow written by the Prime Minister. The paper contained the birth date and time of a certain young girl.

“After the Elderly Master p*ed away four years ago, this marriage doesn’t exist anymore.”

Madam Xu looked at the youngster in front of her and continued, “I know you are a smart person, then we should talk like smart people. The thing you should worry about is not continuing this marriage, but rather how you can obtain enough compensation for giving up on the marriage. What do you think of my suggestion?”

Chen Chang Sheng took his hand out of the pocket but the marriage vow wasn’t in his fingers. “Can I ask why?”

“Why? That is not a question a smart person would ask.”

Madam Xu looked at the young face and decided to add a little more pressure. She knew what the smart and prideful youngster couldn’t stand. A little later she expect him to voluntarily give up on the marriage.

She placed the tea cup upon the table. She stood up and said. “The tea on your table is Butterfly Tea, it is worth five silver taels every 50 grams. The teacup is from the Imperial Kilns, it is more expensive than gold. The tea is cold, you didn’t drink it, which means you are not worthy of the tea. You are just gr* in rotten mud. You are not fine china, you are just broken fragments. You want to change your life by marrying into the Divine General’s family? I’m sorry, it may please you, but I am not pleased.”

Madam Xu’s was calm. Although she didn’t try to sound mean, she had already pushed him into the ground. She didn’t speak with an intentionally condescending attitude, but instead the words felt like someone watching an ant from the sky.

These feelings were all received by Chen Chang Sheng.

Clearly it was all an insult. Especially when she said he was trying to change his life by marrying into the Divine General’s family. It was unacceptable for any prideful youngster. To get back at her, most people would choose to argue angrily and take out the marriage vow, ripping it in half and throwing it upon Madam Xu’s face, perhaps even spitting a few times.

That would be the scene Madam Xu wanted to see – if it wasn’t because that marriage vow was too unique, she wouldn’t have needed to think deeply on how to solve this issue.

The room was silent with no noise in sight.

She stared coldly at Chen Chang Sheng and waited for his outburst.

Yet, events completely fell outside of her expectations.

Chen Chang Sheng looked at Madam Xu calmly and said, “I believe you are mistaken. My trip to the Divine General’s Estate was to give back the marriage vow to you. I wanted to forfeit the marriage from the start.”

The room was silent again.

The wind blew into the room and the leaves were swirling in the air.

Madam Xu was surprised, “Say that one more time?”

She didn’t notice that her voice was nervous, yet relieved. She didn’t care if the youngster was trying to cover up his embarr*ment or wanted to forfeit the marriage, she wanted the promise to be nullified.

Chen Chang Sheng looked at her seriously and said, “Actually…..I came to forfeit the marriage.”

At the corner of the room, the nanny’s expression changed.

Madam Xu’s expression didn’t change, but her hand landed on her chest.

The entire estate seemed to lighten up at this moment.

The wind in the estate turned cold again. The mood became oppressive.

Madam Xu suddenly felt that she had done something wrong.

She forcefully suppressed the uneasy feeling and tried to sound warm, “Why say this? If you’ve already thought it through, then why not……..”

Before she could finish, she discovered that the youngster had no intention to continue to listening to her words.

Chen Chang Sheng picked up his luggage from the floor and put it on his back. He walked straight out of the room. 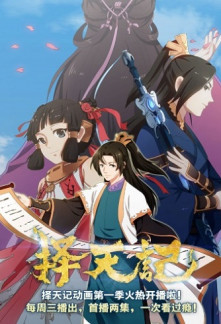