Chapter 1.1: The Youth with the Spirit Eyes

The golden, glazed roof tiles atop the huge, palace-like building shone with a dazzling light due to the sunlight. The ancient workmanship that had been used to create the palace’s golden roof and red doors caused people to involuntarily feel a sense of seriousness when they saw it.

When gazed at from afar, a fog seemed to linger around the palace. The buildings that surrounded the palace were lined up neatly, just like the pattern a brick wall had. The area that they occupied seemed limitless to the naked eye. The two words ‘Duke’s Mansion’ were carved into the fifty-foot tall archway that stood in front of the entrance.

This enormous mansion that occupied an area of over 2 kilometres didn’t belong to a city. Instead, it was a singular building located fifty meters northwest of the capital of the Star Luo Empire, Star Luo City. From this you could see that the owner of this mansion held an honored position within the Star Luo Empire.

During the current time of day, the bright and beautiful sunlight would shine on the sparkling glazed roof tiles, causing a layer of dazzling gold to cover the entirety of the Duke’s Mansion. You could even vaguely see this scene atop Star Luo City’s city walls.

The back door of the Duke’s Mansion’s northern area noiselessly opened, and a skinny figure quietly snuck out.

The figure was a youth that appeared to be around eleven or twelve. His stature was reasonably proportioned, and he was wearing a grey cloth shirt that was simple but clean. He also had a small bundle of cloth on his back. His short black hair appeared neat and tidy. A determined look, which was filled with an intensity that surp*ed all of his peers at the same age, was present on his handsome face.

After softly closing the back door of the Duke’s Mansion behind him, the youth rapidly ran a few steps forward. However, he suddenly stopped to look back at the Duke’s mansion, his deep blue eyes brimming with hatred.

“Mother, watch me from the land of the deceased. No matter how hard I have to work, there will be a day when I return, and trample everything here underneath my foot. Therefore, I’ll honour you by changing my surname to yours—Huo. From now on, my name will be Huo Yuhao.”

After finishing his sentence, he turned to face the Duke’s Mansion, and gazed at it deeply. Then, he turned around and walked away without any second thoughts.

He didn’t head towards Star Luo City, which was located to the southwest of the Duke’s Mansion. Instead, he went north. His tiny figure gradually disappeared into the distance as the strong midday sunlight shone on him. Although his body was skinny, the way in which he’d left didn’t give off a helpless feeling at all.

There were wide roads on all sides of the Duke’s Mansion. Huo Yuhao continued to run forward, his eyes gradually turning redder and redder.

“Mother…” The unwilling and unresigned look that his mother had had as she p*ed away unconsciously appeared in Huo Yuhao’s mind, causing him to tightly clench his teeth.

I have to become stronger! Mother taught me that a person can only rely on themselves. One can only live a better life if they are strong.

Scenes from Huo Yuhao’s memory unceasingly flashed through his mind.

Huo Yuhao’s mother had been one of the Duke’s personal maids, and had grown up together with the Duke. A personal maid only existed for the simple sake of serving her master, but Huo Yuhao had quietly appeared within his mother’s belly one night, twelve years ago.

She was pregnant for ten months, before she finally gave birth one day.

Despite what identity Huo Yuhao’s mother previously had, he was still the son of the Duke. Therefore, although his treatment within the palace couldn’t be described as good, it still wasn’t too bad. His mother no longer remained a maid, and relied on her child’s nobility to obtain a courtyard for herself.

As such, everything should’ve continued without any trouble, but who could’ve known that disaster would arrive so soon?

The Duke went to war as a representative of the Star Luo Empire, leaving all of the Mansion’s internal affairs to the Duke’s wife. The Duke’s wife already had two sons and a daughter, and she treated anything that could affect her children as things that needed to be suppressed. Things were quite good for Huo Yuhao and his mother while the Duke was in the Mansion, but when he left, the Mansion became the world of the Duke’s wife. Furthermore, she was the favourite daughter of the Star Luo Empire’s current emperor.

Huo Yuhao’s mother had grown up beside the Duke, resulting in her being heavily doted upon by him. Thus, she was always envied by the Duke’s wife. Once the Duke left, she immediately became the main target for the Duke’s wife. Using the excuse that Huo Yuhao’s mother had contracted an infectious disease, she chased them to the servant’s wooden sheds, which were located at the back of the mansion. Furthermore, she cut away all their current sources of income. Huo Yuhao was only two when this happened.

Huo Yuhao’s mother didn’t have a healthy body from the start, thus the arduous lifestyle that they had to live in caused her body to gradually collapse. What’s more, the servants under the control of the Duke’s wife would frequently suppress her, causing her to suddenly die from her illness when Huo Yuhao was ten.

The Douluo Continent had originally been divided into two countries ten thousand years ago—the Heaven Dou Country, and the Star Luo Country. However, the Douluo Continent had now been split into three countries. Of the two, the Star Luo Empire still existed, but the royal family had changed. They had fortunately pacified all of their kingdoms at that time, allowing the entire Star Luo Empire to remain united, and thus resulting in them becoming the strongest force of the three.

However, the Heaven Dou Empire was split due to the discord amongst its strong kingdoms. In the end, it was split up into the Heavenly Soul Empire and the Spirit Dou Empire.

The Sun Moon Continent that had drifted over from the west had both a vast surface area and plentiful resources. It was slightly smaller than the Douluo Continent, but it only had a single country, which was the Sun Moon Empire.

However, the Sun Moon Empire wasn’t fully invaded even though it was defeated. They relied on their natural advantages, as well as the conflicting views of the three empires of the Douluo Continent, to gradually form a stable, deadlocked situation between the four parties. However, wars still occurred every year.

Due to the frequent amount of wars that the Duke had to participate in, he spent very little time within the mansion. Due to the Duke’s wife deliberately concealing the matter, Huo Yuhao’s mother was gradually forgotten by the Duke. When the Duke asked about her, his wife merely said that Huo Yuhao’s mother had fallen ill.

Huo Yuhao’s mother had suffered many bitter hardships as she brought him up. When he was six, he carried out the awakening of his martial soul within the Mansion.

Martial souls were an something that everybody on the Douluo Continent possessed. Although the Sun Moon Empire had developed in a different way compared to the other three empires, martial souls were still one of their fundamental concepts.

After the awakening of one’s martial soul, a small amount of people would have a special power along with their martial soul. This power was called ‘soul force’. Only people who possessed soul force had the ability to cultivate, and to become the noblest profession on the Douluo Continent—a soul master.

Soul masters would increase in power as their soul rank increased. If one managed to reach the highest level of the Titled Douluo rank, one would have the terrifying ability to both move the mountains and seas, as well as even shift the stars. 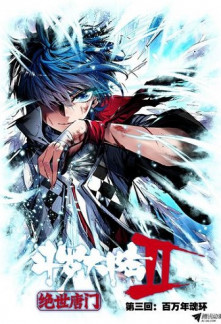 Chapter 1.1: The Youth with the Spirit Eyes