“Xia Lei’s eye got hit by the electric arc! Someone, help!”

In the site’s welding area, Xia Lei curled on the floor, his left eye a blackened hole. The smell of charred flesh hung in the air. A mix of blood and dirt covered his face, adding to a spectacle too horrible to endure.

“Tsk, a healthy young man like him. So, so young… practically a babe, and his eye’s been destroyed. What a waste,” sighed someone.

“He still has a little sister who’s going to university soon. How is she going to attend university if he goes blind?”

“Xia Lei’s a good person who always works hard and gets along well with others. How can this sort of thing happen to him? The heavens are really unfair.”

Xia Lei’s mother had succumbed to her illness when he was a child and his father had disappeared five years ago. That year, Xia Lei had been accepted into Jing-du University but when he thought of his sister Xia Xue, who was still in junior high, he tore his acceptance letter to pieces with tears in his eyes. When his sister asked him about it, he told her that he had failed by just a few marks. After that, Xia Lei started to work in factories, willing to do whatever work he was offered to earn money. Now, his sister Xia Xue had been accepted into Jing-du University as well, but this accident had happened…

The shock wore off and waves of intense pain crashed into Xia Lei. His body twitched and his vision faded to black as he lost consciousness.

There was someone shouting his name in his ear but Xia Lei could not hear him. He was floating on a river of darkness, drifting, drifting to hell.

The p*ing of time went unnoticed for one unconscious.

Xia Lei opened his eyes after some time. He saw some light, then a pudgy face which belonged to his childhood friend, Ma Xiao-An. Xia Lei could only open his right eye, and he was seeing blurry doubles.

“I… What is this place?” As he spoke, Xia Lei seemed to remember something and he reached to touch his left eye. His eye was covered in bandages and burning pain bloomed at his touch.

Ma Xiao-An caught Xia Lei’s hand. “Don’t worry. The doctor said you may not be blind in your left eye. Rest, and it will definitely recover.”

“May? What does he mean by ‘may’?” Xia Lei grew anxious and panic started to set in.

Ma Xiao-An was quiet. It looked like he knew something but was hesitant to say it.

At this moment, a middle-aged man walked through the door. He was dressed in a designer suit, had expensive accessories and was starting to put on weight. It was the construction company boss, Chen Chuan-Hu.

Ma Xiao-An made space when he saw Chen Chuan-Hu enter.

Xia Lei struggled to sit up in bed and greeted, “President Chen, why…”

Anger flooded Xia Lei. He thought Chen Chuan-Hu had come to see how he was doing, but this * came to seek compensation!

Ma Xiao-An couldn’t take it either and he retorted, “What do you mean by this, Chen? My friend has a 90% chance of his eye going blind and you’re saying things like this. Don’t you have any empathy?”

Xiao-An’s words hit Xia Lei like a freight train and he gaped.

Ma Xiao-An suddenly realised that he had let slip the bad news, but he couldn’t take his words back. He stood still, not sure how he should comfort Xia Lei.

Chen Chuan-Hu just laughed coldly and said, “So what does his eye going blind have to do with me? Did we have an employment contract? No? Try and sue me then, I’m not afraid of a lawsuit!”

Xia Lei was so angry his face had changed colour and you could hear him grinding his teeth.

Chen Chuan-Hu added oil to the fire. “I had you sent to the hospital since you were so pitiful. I’ve paid the hospital fees of 10,000 so get discharged when you want to. I’ll say one thing more – this 10,000 is compensation. So, the case is closed and don’t bother me after this. It’s no use coming after me anyway.”

Chen Chuan-Hu pointed at Ma Xiao-An’s nose as he replied nastily, “This doesn’t involve you, small fry. If you’re looking for trouble then I’ll give you trouble, you little *! Don’t you know what sort of person, I, Chen Chuan-Hu am? If you dare cross me I’ll tear you apart!”

At that moment, Xia Lei suddenly grabbed the water gl* on his bedside table and flung it at Chen Chuan-Hu.

A thunk sounded as it struck Chen Chuan-Hu, who had no time to block. A gash appeared on his head, dripping blood and instantly wetting his large, fierce face.

“Fuck! You dared to hit me!” Chen Chuan-Hu was hopping mad.

Two tall, skinny young men rushed through the doorway. They had tattoos, pierced ears and aggressive gazes – you could tell from just one look that they were hoodlums from bad society.

“Beat him up!” screamed Chen Chuan-Hu as he pointed to Xia Lei, who was lying on the hospital bed.

Ma Xiao-An used his own body to shield Xia Lei and clenched his teeth, bearing his pain as the two young men’s blows rained on his head and shoulders. He was protecting Xia Lei and also pressing him down to stop his from doing anything rash.

“What are you doing?” A nurse pushing a trolley appeared in the doorway. She was shocked for a bit, then quickly shouted, “Help, somebody! They’re fighting!”

The nurse ran to call security.

“Just you wait, you little *!” Chen Chuan-Hu threw one last threat before he walked out the door, followed by the two young men.

Only then did Ma Xiao-An let go of Xia Lei. His head was starting to swell and he grimaced in pain.

“Why did you stop me?” Xia Lei did not seem to be in the right state of mind. “I want to kill him!”, he yelled.

“Kill him? He’s just one rotten person. You, on the other hand, still have your sister to take care of. He can have all the booze and partying he wants but you have yet to have one good day. Is it worth it?”, sighed Ma Xiao-An. “Calm down, Lei!”

Xia Lei was not an impulsive or reckless person. His parents’ absence had made him independent and mature but the events of that day were too despairing for him to bear gracefully. There was no calming him at the thought of his eye having a 90% chance of going blind.

“I’m sorry, Xiao-An…” Xia Lei could not finish what he was about to say; his thoughts were a mess.

Ma Xiao-An patted Xia Lei in the shoulder. “Why so formal between us friends? You would do this for me too, won’t you?”

When Ma Xiao-An was bullied in the past, Xia Lei would always rush to protect and defend him at all costs.

“No, no… Don’t tell her”, replied Xia Lei nervously. “She’s in school now tutoring someone. If she knows about this, she’ll be worried.”

“But she’ll know sooner or later.”

Just then, the nurse walked in with a security guard. The guard asked Xia Lei some questions about the incident while the nurse tended to Ma Xiao-An’s head wounds. The nurse and security guard left, but the matter was still left hanging.

Ma Xiao-An stayed by Xia Lei’s side till sometime in the night. After he left, Xia Lei was unable to sleep. Thoughts ran round and round in his head. He thought of the hospital fees, his future, his sister Xia Xue and her dream of going to Jing-Du University. Finally, exhaustion overcame him and he closed his eyes.

After sleeping for some time, Xia Lei’s left eye begun to itch and he woke up. It was difficult to describe the itch – sometimes piercing, sometimes annoying.

Xia Lei called for the nurse but nobody responded. He looked for the call button on his bed and pressed it, only to discover that it was broken.

“Bad luck. Till when will I have this bad luck? What lousy hospital is this?” Xia Lei was depressed. He crawled out of bed and walked cautiously to the door.

He’d wanted to go to the nurse station but he stopped when he was by the door.

“The doctors and nurses here know I have no money, and Chen Chuan-Hu also came by to make a ruckus during the day. They know that I definitely can’t afford the hospital fees. They would ignore my request to check and clean my injury for sure since it’s in the middle of the night. They may even roll their eyes at me. Forget it, I’ll just bear the pain for a while longer.” With these thoughts running through his mind, Xia Lei turned back to his bed.

The door to the toilet was open and Xia Lei saw his reflection in the mirror.

He was rather handsome – delicate features which were quite desirable and a height of 180cm. He had a strong, defined body and was considered a bright and dashing young man. Unfortunately, this was all in the past. If his left eye went blind and he was left with a huge scar, women would surely keep their distance from him.

His reflection made him feel sad.

A wave of itchiness suddenly hit him, interrupting his thoughts. He pondered, “An itching wound is a sign that the wound is healing, but I was injured during the day. Why is it itching at night? No… This is my eye. I have to see what’s happening with my eye.”

Xia Lei entered the toilet and stood before the sink, facing the mirror. He reached to unravel his bandages.

Layer after layer of bandages fell away, till the last layer was gone and Xia Lei could see his left eye. He was shocked by what he saw.

His left eye was covered by a thick layer of white ointment, which seemed firmly glued to his eye. What was strange was that when he observed his left eye, he faintly felt that it had seen the toilet light through the thick layer of ointment, but what it saw was very blurry.

“How… How is this possible?” Xia Lei was stunned.

Under normal circumstances, even if his left eye had not been injured it would have a thick layer of ointment covering it, making it impossible to see anything. However, he had seen the light! 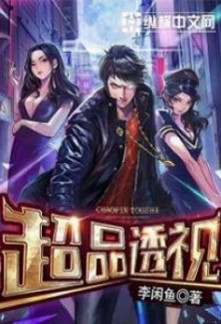