It was July, and the sun was harsh and shining bright in the sky.

Even though the thick curtains had been drawn shut, the vicious sunlight could not be completely blocked away.

It shined through the gaps of the curtains, forming a squarish border, which was the only source of light in the room.

After ringing three times, it went to the answering machine.

“Kieran? This is Doctor Wong. You are one year away from turning eighteen years old. If you don’t start your genetic treatment immediately, you will lose your chance completely!”

Polite and official as usual.

Kieran ignored the message and concentrated on the game cartridge in his hand.

Bright red color, the size of a thumbnail.

After he checked it, Kieran pushed the cartridge that had cost all his savings inside the virtual helmet’s cartridge slot.

An alert notice came out of the virtual helmet’s speaker.

There was obviously no such thing as a manufacturer or safety hazard warning when it came to an underground game.

When it was first released a year ago, this game had claimed that it could achieve a hundred percent realism.

Theoretically, when a game proclaims a hundred percent realism, it should easily be able to overtake all other games that could only achieve around thirty to forty percent realism, and become an instant hit among fans.

However, in this case, the game was banned before it was even released to the market.

The reason: it was too real.

Real enough to kill you if you died in the game itself.

Out of three thousand beta players, only ten percent survived and were able to log out of the game.

Counting thousands of casualties, it was decided that this game could never be released to the market. Even so, Kieran had heard some rumors about rich people wanting more excitement and investing in this game to make it work again, thus making it a true underground game that only a handful of people could access.

Not even taking into account the hidden ways one had to resort to in order to purchase this game, and the extraordinary fees that one had to pay, the fact that death in this game meant death in real life was enough to make everyone stop seeking it.

But Kieran did not care.

Because if he did not manage to gather three million in medical fees within the year, considering the condition of his genetic disorder, he would die anyway.

Three million might not have been that big of a number for someone who was rich, but for Kieran, it was an unachievable sum of money.

Three years ago, when he was first diagnosed with genetic illness, he had already been working hard to make a living.

But that was only a drop in the ocean for him.

Kieran was only fourteen years old back then; a normal union secondary school student with no academic diplomas. Although he was young and energetic, he did not qualify for work because of his age.

He could only work part time.

However, no matter what kind of part time job he took, he still could not have afforded three million in medical fees.

Even by working three jobs and getting only five hours of sleep a day, he could only accumulate thirty thousand over the years.

That was only one percent of what he needed for medical fees.

He had so much hope, so many dreams for his life… He did not want to die.

But reality was cruel.

Then, at his time of despair, he heard a rumor about an underground game from the blacksmith that he was working for.

The rumor said that any epic equipment could sell for millions in that game.

After confirming the rumor, he decided to take a chance on it.

He used his savings from three years of hard work and bought the underground game’s cartridge, ready to gamble for his life.

“Make it or break it!” he thought to himself.

He put on the helmet and lied down on the bed.

His vision darkened as a line of words appeared, accompanied by a voice.

[Underground Game welcomes you. The game will begin shortly...]

[Background: War is descending upon the city. The people are not prepared for it. Most of them died in the crossfire, leaving behind civilians like you struggling to survive in the ruins of the city. Shootings scare you from time to time. The rebels and the thugs have no intention to cease fire. Their eyes are filled with rage and violence, and they want to destroy everything!]

[Secondary Mission (Optional): Aid civilians until the war ends. Each civilian helped can provide you with a higher rating.]

(Hint: The Beginner’s Dungeon is a great opportunity for every player.)

When all the words appeared, the game paused for about three minutes, allowing Kieran sufficient time to read them. Then, a blinding light struck him. Even with his eyes shut, he could still feel it hurting his pupils. He held his hands up and tried to block the light. He felt a falling sensation similar to a fast descent towards the ground.

The sensation lasted for a couple of seconds.

When he felt like normal again, he moved his hands away and opened his eyes.

For an instant, his eyes widened.

In front of his eyes, less than a meter away, lied a body with its stomach ripped open, its head slightly tilted up, and its rotten eyes staring directly at Kieran.

In his life, he had never seen a human corpse before.

The worst he had seen was bleeding during fights.

Now, a corpse was right in front of him, and staring at its lifeless eyes was enough for him to panic in fear.

Frightened, Kieran’s natural instinct was to back off right away until he hit the wall behind him.

The impact of his back hitting the wall caused him blinding pain.

However, the pain rescued him from fear and panic, bringing him back to his senses.

“This is a game! This is a GAME! Even though it is a hundred percent real, it is still a game!”

His senses allowed him to realize the kind of situation he was in.

This was not a real corpse. It was just a game simulation.

However, the realism in front of his eyes, the smell of blood, and the rotten smell of the body convinced him otherwise, and he needed proof to calm himself down.

During his part time work at the blacksmith’s, he had gotten quite familiar with gaming controls.

Luckily, some of the rules and controls applied to every game, even to this underground one.

As his voice rang out , a Character Attributes Window that only he alone could see

appeared in front of him.

The Character Attributes Window was made up of three columns.

The third page included skills, equipment, and inventory, but it currently only displayed empty slots.

Even though the rating at the end offended him a little, Kieran still maintained a smile on his face.

If the system windows still appeared in front of him, he was undoubtedly within the game.

Despite the fact that it felt a hundred percent real.

Kieran took a few deep breaths, shrugged off the remaining fear and calmed himself down.

When he felt calm enough, he looked at the ripped corpse.

In real life, it would surely cause him fear and panic; but in the game, the body held a different meaning: in-game currency and equipment!

He had not forgotten why he had entered the underground game in the first place—earn enough money to get treatment for his genetic illness.

But in order to do that, he would need to get strong enough.

Only when he was strong enough would he be able to acquire more in-game money and decent equipment, and when he had enough of that, he could trade it in for money in real life.

Yet now he had nothing. No skills, no equipment, an empty inventory, and low character attributes. Even his rating was rock bottom. Obviously, he did not meet the requirements yet.

He would need more time to get stronger.

But he did not have that much time either.

He only had about a year left back in real life.

But inside the game?

Although he could not determine the exact time that he had, by the looks of the virtual game time, he did not appear to have a lot of extra time compared to real life.

The reason why he needed to take advantage of every opportunity to make himself stronger.

In front of his eyes, there lied such an opportunity.

Holding back his disgust, Kieran slowly got closer to the body.

Even though he knew it was just a game, the one hundred percent realism made him feel like he was actually approaching a corpse.

The stench of the dried blood made him feel really sick.

Kieran avoided looking directly in the body’s turbid eyes. As for its ripped stomach, he dared not even lay an eye on it. He used both his hands to search the corpse, looking around for anything.

After a while, Kieran’s eyes shined brightly as he tilted his head slightly, as if he had found something.

He looked at the strap his left hand had latched on, pulled it out hard, and watched as a backpack fell off the body.

The backpack had been hidden well, concealed by the way the body had been arranged. If Kieran had not searched carefully, it would have been hard to spot with the naked eye.

It had to hold something good inside.

Instinctively, Kieran’s eyes turned p*ionately to the backpack in his hands. 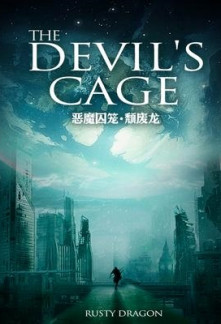