As soon as Fu Jiu said that, the person who was standing in front of her felt thunderstruck and ran to the door while screaming, “Doctor, doctor! My young master, it appears his brain has been damaged!”

Young Master? You mean her ?

Fu Jiu realized something was wrong and frowned hard.

Something seemed to be trying to get into her brain!

She shook her aching head and dazedly looked at herself in a full-length mirror.

There was what seemed like a young man in the mirror. He was tall, slim, and around seventeen years old, and he had very black eyes. His figure was smooth and accentuated but he was no man.

Her skin was perfect. It was fair like porcelain all over and completely flawless.

That messy silver hair didn’t make her seem decadent at all. On the contrary, it added a luxurious temperament to her and made her look like an eastern vampire royal.

The young man’s ear had a black piercing which was exuding a dim light.

Anybody who’d seen this young man for the first time would think the same thing.

If Fu Jiu didn’t know that she was a girl herself, she would even think that the one in the mirror was a boy.

However, she was clear that no matter what, she or even this body that she had was a girl.

Fu Jiu looked at herself in the mirror and closed her eyes. She opened them up after a few seconds. Something very mysterious was in her eyes.

“Young Master!” The man who just ran out came back in and dragged a doctor inside as well. “Hurry, take a look at my young master. See if his brain is really damaged!”

The doctor used a medical light to check on Fu Jiu’s eyes.

She was receiving non-stop information being sent to her brain.

Even though this body had the same family name and first name as she did, the situation was totally different.

Clearly, she was a girl, but her mother had raised her like a boy.

But no matter how her mother had raised her, this body was still into men.

And all girls would fall in love during high school.

She, well, fell too hard and didn’t know the manners a girl should have. She went up and circled around directly whenever she saw good looking guys.

Therefore, people sent her to the hospital by beating her up badly, thinking that she was gay.

After Fu Jiu had remembered everything, she didn’t look too well.

She had once hacked into the Pentagon with a single computer.

So many FBI agents had used all kinds of honey traps and reverse honey traps just to capture her, but they couldn’t get her even with ten big black guys.

Being sent to the hospital all beaten up… Really, it was kind of funny.

Fu Jiu actually laughed out loud, but her eyes were still cold, and there was a trace of evilness in her deep black eyes.

“Young Master?” Chen Xiaodong looked at her in confusion.

Fu Jiu looked back at him absent-mindedly. Then, she raised her hand to push her silver hair back, showing her perfect demon-like face.

She made even that most ordinary of gestures look arrogant and domineering.

Chen Xiaodong was in shock, feeling that something was not right with his young master.

How should he put it? Young Master used to be very bad-tempered, spending money as if it were water and acting like a total “nouveau riche” rich kid with no manners and taste.

But today, he saw the word “handsome” on his young master… 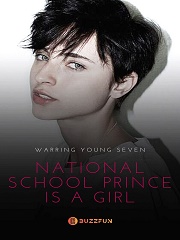