Night slowly settled in a quiet manner and bright stars began to appear.

On the hillside, a child about six years old is standing in a strange position. The child’s feet are stretched open, toes touching the ground with the heels lifted, hands raised high above the head, his head tilted up, and faint spiritual energy constantly circled within his small body.

The boy continued his practice in this bizarre position, inhaling spiritual energy into his body, letting it flow along the meridians.

As the moonlight faded, replaced by the first rays of sunshine, the child slowly lowered his palms. His eyes opened to reveal deep, dark pupils that seemed to have a sharp golden glint deep within them.

Huang Xiaolong breathed out a mouthful of foul air, his eyes staring at the rising sun. From the day he was born till the present day, it had been seven years since he came to this world. He started practicing the Body Metamorphose Scripture since he was three and now four years later, he had managed to reach the Third Stage: Palm Propping the Sky Gate.

In his previous life, his ancestors trained under the banner of the Shaolin Temple and the Body Metamorphose Scripture was an inheritance from his ancestors. Until now, Huang Xiaolong has been unable to understand the reason why, someone like him who was hailed as a prodigy of martial arts in his time, was brought to this world.

And the matter that depressed Huang Xiaolong the most was that he awoke in the body of a newborn baby.

Huang Xiaolong looked at his small thin arms and smiled sourly. He had been seventeen, and after fourteen years of hard work, he had managed to train in the Body Metamorphose Scripture up till the Ninth stage, but never could he have imagined that he would be starting all over again.

At this moment, Huang Xiaolong heard the soft rustle of footsteps, coming from the direction of the hillside. Huang Xiaolong knew who it was without having to look over his shoulder and sure enough, soon a tender, childlike voice cried out: "Big Brother, I know that you are here to see the sunrise. Dad and Mom are looking for you.”

Huang Xiaolong turned over his shoulder and saw a lovely little five-year-old girl, big round eyes and her hair braided into two long braids coming up the small hill. This little girl was Huang Xiaolong’s sister, Huang Min.

Other than Huang Min, Huang Xiaolong had another brother, three years younger than him named Huang Xiaohai.

"Dad and Mom are looking for me?" Huang Xiaolong asked. "What is the matter?"

"I don’t know." Huang Min’s voice was laced with innocence, "Brother, let’s go back. If we are late, then Dad and Mom will spank your backside!”

When Huang Xiaolong heard this, he smiled and squeezed Huang Min’s cute little cheeks before saying, "Let’s go then,"

Huang Min rubbed the spot where Huang Xiaolong pinched her little face, pouted then said sulkily: "Brother, you are truly hateful. I have told you, no pinching of my cheeks!”

However, just as Huang Min’s finished speaking, her cheeks were once again pinched by Huang Xiaolong, who laughed heartily as he made his escape. Huang Min chased after him screaming, trying to catch up.

The siblings frolicked all the way down the hill until they got back to the Huang Clan Manor situated at the foothills.

Although he was already seventeen in his previous life, being with his sister Huang Min brought out the child in him.

Soon, the siblings got to the Huang Clan Manor.

Back in the manor, Huang Xiaolong headed straight to the Eastern Courtyard’s main hall. When he arrived at the main hall, there was a scholarly looking middle-aged man in his mid-thirties dressed in a white robe sitting on the head seat, and next to him was a pretty woman. This married couple was Huang Xiaolong’s parents in this life, his father Huang Peng, and his mother, Su Yan.

"Dad, Mom, you were looking for me?" Huang Xiaolong asked as he walked into the hall.

Huang Peng raised his sharp, sword-like brows: "Where did you run off to so early in the morning?"

"It’s fine. Don’t frighten the child." Su Yan interjected with a smile: "Long’er, in a few days you will be seven years old. It’s about time to awaken the Martial spirit in your body. Your father and I are planning to bring you over to the Martial Hall for the awakening ceremony.”

In this world, humans have an existence termed as martial spirits in their body. Human warriors’ strength was closely related to the talents of these martial spirits, and they were graded into low, average, and high; within each grade, they are rated one to ten. Martial spirits graded ten and above were considered as superb talent martial spirits, a heaven-defying existence. The higher the talent the better the body absorbs the world’s spiritual energy and become a strong Warrior.

Nevertheless, there were also people born without martial spirits or crippled martial spirits were unable to train. In Martial Spirit World, these people were labeled as wastes!

An imposing middle-aged man stood in the center of the Martial Hall; he had a square face and thick, dense eyebrows, and an oppressive aura came from him. This man was Huang Peng’s older brother, Huang Ming. Also Huang Xiaolong’s Uncle; and next to Huang Ming stood a boy the same age as Huang Xiaolong; Uncle Huang Ming’s second son, Huang Wei, also here for the martial spirit awakening ceremony.

In Huang Xiaolong’s memory, he had never seen this uncle of his laugh. Huang Ming was in charge of the Huang Clan Manor’s Punishment and Disciplinary hall; therefore, he was a very strict person.

Huang Ming did not utter another word after that, and Huang Peng knowing his brother's temperament, took no offense.

Upon Huang Qide’s arrival, residents of Huang Clan Manor present in the hall quickly rushed over to pay their respects.

Huang Qide smiled, nodded his head at Huang Ming’s group before turning to face the rest of Huang Clan Manor’s people-- he smiled and said: "Do not stand on ceremony. Today, I came over just to have a look.” Usually, the Old Manor Lord would not make an appearance during the martial spirits awakening ceremony at the Martial Hall, however, this year was special because of Huang Wei and Huang Xiaolong. This, Old Manor Lord exited his closed-door retreat earlier than planned.

Huang Qide walked to the front of the main hall, his eyes swept over the crowd in the hall before finally stopping on an old man in a gray robe standing next to him, laughing amiably Huang Qide said: “Since everyone is already here, let’s begin.”

"Yes, Manor Lord." The old man in gray-robe answered respectfully, and then he walked to the center of the hall.

Chen Ying stood at the center of the hall, a light glowed in his hands, spreading an overwhelming force around the hall.

Huang Xiaolong eyes flashed; is this power of a Ninth Order Warrior’s battle qi? So strong! Even with the strength of his previous life, having trained in the Body Metamorphose Scripture till the ninth stage, he still would not be Chen Ying’s opponent.

With Chen Ying’s channeling his battle qi, suddenly, in the center of the hall, a bright hexagonal pattern shone, forming a beam of light.

"Yes, Grandfather." Huang Wei answered and stepped forward into the hexagonal pattern light beam. As the beam of light fell on Huang Wei, the focus of everyone in the hall was on Huang Wei who was now standing within the beam of light. Huang Ming’s face which had always been expressionless showed a faint trace of tension as he watched his son.

Huang Qide stared at the faint black shadow behind his grandson Huang Wei; his eyes shone brightly as he let out a big laugh, tremendously pleased.

"This is a grade ten martial spirit, the Three-Eyed Black Tiger!" The Chief Steward Chen Ying cried out in a trembling voice. 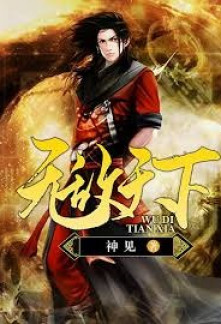