The most painful thing in this world is to dream that you were in heaven for a second, then realize you are in hell in the next.

Mo Wen was indeed that person. He was sitting in a cl*room two months ago, dreaming of going into the university he desired, but now he had been reduced to a construction worker who was working under the scorching sun.

Thinking of his tragic past, Mo Wen spat forcefully and his spittle hit the ground. He lifted his hand in a vain attempt to wipe the continual flow of sweat off his face. Now, he was totally drenched in his perspiration after he had finished moving a load of bricks off a wheelbarrow.

It would be good to be rich. Rich people are capable of evil things.

Mo Wen was an eighteen year old. He was scrawny with an ordinary appearance, dark with a pair of calm and deep-set eyes. Perhaps the children from the lower income families become the master of the house earlier in their lives; he looked more mature than others of his age.

Mo Wen pushed the wheelbarrow, which he used to transport the bricks, to the side of the road and found himself a shady spot to take a breather. It was the best time to skive off work as the supervisor was not around. It was indeed a luxury to skive off in a mundane, yet busy construction site.

He boldly sat on a slate of a cemented board, focusing in the direction of the road. After a while, his eyes gleamed with interest. His attention was attracted to the slender figure walking from the opposite side of the road.

Although she was at a distance with her appearance obscured, her hourgl* figure was definitely attractive; especially the elegant way that she moved. It was like a professionally trained model.

The way a woman moves speaks a lot more than just a movement. Even though Mo Wen was constantly trapped in the construction site, he enjoyed quick peeks of the beautiful ladies walking on the road and pathways opposite from the site whenever he was free. Although he could not see their faces from afar, looking at the myriad of different beauties was also a feast to his eyes.

He seemed to have thought of something, because then he pulled out a cyan metal disc. It was the size of a coin and was attached to a thin cyan chain. It looked like a strange necklace.

Mo Wen found it a few days ago while demolishing the ancient buildings. He discovered an ancient cyan brick on a slab of wall. The cyan brick, which was estimated to be a century old, was full of holes and badly broken.

Other centenary antiques might worth a lot of money, but a piece of cyan brick was completely worthless, regardless of being ancient.

Mo Wen conveniently threw the cyan brick onto the ground. Then, but expectedly, the cyan brick cracked from the center and a metal accessory dropped out from it. It was the strange necklace in Mo Wen’s hand.

The cyan metal disc was a little strange. It was divided into eight sections with different weird cravings of runes on it.

Mo Wen was not familiar with antiques, but he was able to decipher the thing in his hand to be a miniature Eight Trigram, which people usually use at home as an amulet to ward off the evil for good fortune.

Although he was not superstitious and did not believe that Eight Trigram had the ability to ward off the evil for good fortune, he knew that such an ancient Eight Trigram should be valuable. Perhaps it might be an antique which would make him an overnight millionaire if it was sold to an antique dealer.

Mo Wen’s eyes were full of hope while caressing the Eight Trigram as if it were his lover. Once he became a wealthy person, he would be spoiled for choice when it came to those beautiful women whom he could only secretly drool over and peep from afar in the past.

A resounding of cries came from nearby disrupted Mo Wen’s daydreaming, followed by people running towards it.

He looked in that direction quizzically and hesitated for a moment before standing up and running towards the crowd that soon formed.

Mo Wen arrived at the scene very quickly, as it was close to him. Many construction workers had gathered there. With a glance, he was shocked to see what had happened. A middle-aged man in his fifties dressed in tattered clothing was lying pale on the ground in a constant spasm, gasping for breath with his hands grabbing his chest tightly as if he was in great pain.

There was immense terror in his eyes, like he could feel death approaching.

Many workers rushed there but were fearful to approach. They were too frightened to take any action impulsively as they were just uneducated construction workers who didn’t know what had happened.

Mo Wen’s face changed slightly, uncomfortable to see Lao Zhang having a spasm on the ground. He identified Lao Zhang’s illness at one glance as he had witnessed the whole process of someone who died of Acute Myocardial Infarction within a few minutes in the village.

The village he used to live in was very remote, so it basically did not have any professional doctor. Anyone who was sick in the village would usually be treated with folk medicine which was p*ed down from their ancestors instead of targeted treatment.

As his mother was frail and sickly with an overworked body and the village did not have any doctor, his biggest dream was to study in the most famous Medical University of the country to be a doctor who could cure the illness of his mother and the villagers.

Unfortunately, he failed to get into the university. Although his score was good enough to get a scholarship to study at the Hua Xia University Medical Faculty, he was reaped of that chance and was replaced by a pampered son of the wealthy and influential family who scored lower than him.

He was able to get into another school with his results, but the expensive school fees became an expense he could not afford. As he had to start working to earn some money, he had to give up his study so as to lighten his mother’s burden.

The construction site was far away from the downtown area. It was in the developing area of a suburban district. It would take about 25 minutes for an ambulance to reach the nearest hospital which meant that the condition of the patient would have to survive 25 minutes of that ride. Serious condition of Acute Myocardial Infarction could easily kill anyone in a few minutes. To survive 25 minutes would be a miracle!

He happened to know him. His name was Zhang Lao Shi, a co-worker who lived in the same workers’ dormitory, whom they usually called Lao Zhang. He was a simple and honest man with no specific skills, who was reduced to lowest cl* worker in the construction site like Mo Wen – an unskilled construction worker.

Lao Zhang’s son was in the university and he worked really hard to support his son’s study.

Mo Wen hesitated while looking at his co-worker, Lao Zhang. His dream was to be a doctor, so naturally he had some basic medical knowledge. He definitely knew the first aid treatment to apply for Acute Myocardial Infarction in order to alleviate the condition.

However, who dares to save anyone these days? It would be great to save a life, yet when the life was not saved, the responsibility and consequences would bore on the rescuer.

That was the sad reality of society; perhaps a simple first aid treatment would alleviate the condition of the patient to prolong life and may even save a life, yet Mo Wen was like anyone else around him, hesitating to approach and help.

Taking a deep breath, he kept his silence but eventually heaved a sigh before walking towards the afflicted Lao Zhang. He was not a Mr. Nice guy but he knew Lao Zhang well enough and both of them came from the rural village to work in the city. They both understood the pain and anguish the other was going through. He couldn’t bear to see Lao Zhang die right before his eyes, knowing that he was the sole breadwinner of his home.

A slender figure dashed from afar, scurrying through the cluttered construction site to the scene.

Mo Wen was slightly stunned, unconsciously paused in his path. A whiff of fragrance came towards him before a slender figure appeared in front of him.

The girl was extremely beautiful, slender and tall, about half a head shorter than Mo Wen. She was dressed in a knee length floral dress, showing off her fair and slim calves. She looked attractive and lovely as her dress fluttered along with her little lope towards him.

Mo Wen couldn’t resist gazing at her as it was the first time he had seen such a beautiful girl, despite the fact that he had spent so many days peeking at the p*ing girls in the construction site. The image of her naturally carved, beautiful face was constantly replaying itself in his mind. It was such a clean face without a trace of cosmetics, yet it looked so stunning.

It dawned upon him that she was the girl who stood across the road a while ago, the bodily figure he was fantasizing about just now. Now he realized that she not only had a perfect figure, but also an exceptionally beautiful face.

The girl didn’t pay attention to Mo Wen. She simply crouched towards Lao Zhang to examine his condition. Soon the beautiful face appeared grave, as if the situation was somehow critical.

Mo Wen knew that the situation did not look optimistic as Lao Zhang was going into shock.

The girl lifted her head to glance anxiously at Mo Wen. At that moment, Mo Wen was the nearest to the patient, so naturally he was the first to be asked.

Mo Wen was slightly distracted for a moment as he didn’t expect the girl to approach him for help. However, he composed himself quickly and strode towards the girl.

“Can you lay him flat on his back and slightly elevate his legs?” the girl asked as she carefully performed an indirect heart m*age on Lao Zhang.

As Mo Wen was well-versed with the measures in alleviating Acute Myocardial Infarction, he was able to follow the girl’s directions immediately. He concurred with the girl’s measures; in the absence of oxygen tank or any equipment at the present moment, elevating the legs of the patient is the best solution as it would prevent the patient, who was in shock, to be lack of oxygen in his brain.

Mo Wen was secretly sizing up the girl who was concentrating on treating the patient. A light, fresh aromatic scent was faintly emitted by the girl and he was certain that it was not any kind of perfume. This scent had a relaxing effect on him, causing him to gradually become addicted to it, making him subconsciously take deep breaths of it.

Suddenly, he felt a spur of heat building up in his chest. It got hotter as the minute p*ed, as if there was a burning iron attaching to his chest. His face turned pale and he ran his fingers to his chest. He realised it was the Eight Trigram that he found among the cerulean blue ancient bricks.

The next moment, a loud deafening sound resounded in his mind. His whole world began to spin while a voluminous flow of information rushed through his head. 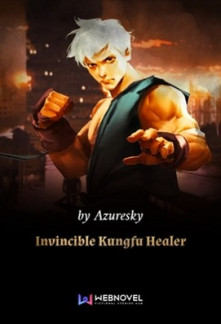