A drop of cold sweat dripped down his forehead, as Jiang Chen stared at the m*ive pair of boobs in front him. They were at least size 36D.

Below her eyebrows was a pair of valiant looking eyes, a beautiful nose, and a delicate mouth. However, her malicious expression certainly tainted her beauty. A pitch black pistol and a wicked looking whip, were held in her hands.

If the surrounding was decorated with a few more *ually suggestive items, every man in the world would fantasize about what could happen next.

Jiang Chen’s heart swelled with regret and fear. He did not feel any sense of pleasure or consider the possibility of being aroused.

His pants all the sudden felt tight. He must be delusional right now. [There is no way I am a masochist.]

He knew he had no weird fetishes. So, any physical reaction would be an accident in this dire situation.

“Name?” The busty girl asked. She was wearing a black leather jacket, with a pair of jeans that has started to fade after too many washes. She shook her hair, as she forcefully stepped onto the chair’s arm.

“Jiang Chen…” He swallowed, as he responded truthfully. As a civilized man himself, he has never seen a girl so barbaric.

The girl raised her eyebrows. “What a girly name?”

[Why don’t you ask my mother? Dammit!] Of course, he could only say that in his head. He feared that the moment he opened his mouth, a bullet would create a new hole on his forehead.

Yes, this hottie had a pistol on her, which made the atmosphere not even remotely romantic.

“I was born in the morning, hence the name morning (Cheng) in my name,” Jiang Chen mumbled. The name was not girly by any means. However, the fact that he looked very delicate, didn’t contribute to his cause. Even if he had a masculine name, the contrast would be even odder.

“Don’t get off topic.” The girl lashed the whip onto the sofa beside him. The loud cracking sound scared Jiang Chen so much, that he curled into the chair. “I am not interested in your mom.”

[God, you were the one that asked.] Jiang Chen swore in his mind, as his face paled.

“You have the potential to be a great looking guy.” the beauty smiled, as she approached him. She touched Jiang Chen’s face with the side of her whip. “You are going to answer my questions. If you dare to lie, I don’t mind creating a few scars on your lovely face.”

Jiang Chen’s face turned red as he tried to hold back his scream. [Why do I feel so violated?]

“Where are you from?” The girl questioned as she gazed directly at him.

“I am from the north.” Jiang Chen responded with a lie. Of course, he never believed that the girl could see through him. [ Wanghai City? Here is Wanghai City? This deserted place?]

“This can of cola, where did you find it?” The girl’s pronunciation was odd as if she has never heard someone say Coke before.

Jiang Chen felt the girl’s voice transform as her breathing rapidly grew. The tone was filled with an intense lust, or greed?

“No sh*t! I know it is pop. I am asking you, where it is from!” The girl chugged the coke. As soon as she finished, she exhaled with relief. Then she threw the can onto the ground, and lashed her whip onto the poor sofa once again.

A drop of sweat dripped down his face. He steadied his breath as he tried to remain calm. “I can’t explain that.”

“Is this the way you treat someone who just saved your life?” With a sudden burst of courage, he argued back.

After a brief moment of silence, she let out a slow sigh. She put the gun away and threw the whip onto the ground. “Fine, I did cross the line.” Despite admitting her fault, she had no intention of letting Jiang Chen go.

[Since she only whipped the sofa, she probably has no ill-intention after all.] Jiang Chen thought in his head.

“Trust me. I have no harmful intentions,” She said. However, Jiang Chen was uncertain about how long her conscience would last, so he continued to make up stories.

“Like how I saved you from starvation? If I told you anything today, it would make both of our lives more complicated than it needs to be.” Jiang Chen continued to respond with a secretive tone. His words left a lot to the imagination.

“Haha,” the girl forced a careless laugh. But the uncertainty in her eyes was clearly evident.

“Maybe we can partner up! I just got here and… how can I explain this. Everything here is terrible. I need a guide, and I can pay you handsomely for it.” He proposed an offer with a luring hint in his voice. He was using the stick and the carrot strategy.

“Oh? You are from the Northern Alliance?” The girl asked with her eyebrows raised.

On this wasteland, if there are any signs of law and order; it must be the distant alliance on the northern tundra. They were not a target of the nuclear destruction, nor were there any infectious disease breakouts. Hence, order remained on the land far away.

However, order was a relative term; they lacked real justice because slavery, corruption, and civil war all still existed on the land. Only the slightly higher food production made the area, made it somewhat more attractive. Overall, it was no better than the anarchic Wanghai City.

“No, I am only from somewhere relatively well off. Hmm, and I am collecting some useful resources for someone. At the same time, surplus commodities are disposed- like the can of pop you just finished, or the three cans of food that you devoured clean.” Jiang Chen did not continue with the disguise as a member of the Northern Alliance. What if she realized he was lying after all.

The best idea right now was to say that he came from a distant place. A place that nobody visited before.

The girl blushed as she heard the words “devoured clean” and she realized that her etiquette at the time must not have been the finest. She stared at Jiang Chen with a fierce look. Jiang Chen laughed as he dismissed the idea. He knew the negotiation was successful.

“I don’t know what you guys want in this city. All the supermarkets, storages, and even refrigerators are raided clean. There is no way you can even find one piece of bread.”

“My fair lady, what is your name?” Jiang Chen said, shaking his head.

“Sun Jiao,” She responded, as she again raised her eyebrows. With a devious smile on her face, she said, “Let me get this clear, if the partnership involves anything strange, I might blow your head up.”

“Don’t worry, miss.” Jiang Chen sighed. There was no way he would get in bed with a girl that could kill him at any moment. “I only need an experienced guide and, do you think I lack food?”

“Then what exactly are you searching for? Could it be… for slaves?” Sun Jiao paused for a second before she maliciously gazed at Jiang Chen.

Of course, if he had plenty of food, then he must have farms or plantations, and related production facility. Sun Jiao’s first instinct was that this guy might be a slave trader. Slaves were the finest labor force on the wasteland and slave trading was considered to be the norm. However, Sun Jiao thoroughly hated slave trading because a slave trader abducted her sister. It would be fine if she got sold into a factory, but if she got sold into prostitution or even to the cannibals, it would be a complete nightmare.

“No, no, no. This is a complete misunderstanding,” Jiang Chen explained. “I don’t need slaves. I need technology.”

“Yes, technology. Just like the laser gun you are holding and the computer on your arm. While we have those things, we can’t produce them ourselves. Therefore, we decided to come to this deserted city to find some old technology.”

“These things?” Jiang Chen’s question caused a mixture of confusion and suspicion. “These things are hard to make? In Liuding Town, a lot of people can *emble these.”

[Dammit,] Jiang Chen swore in his mind, but he remained calm.

“That was only an example. Our technology in food production and transportation is highly advanced, but our general technology is rather lackluster. Which is why I am here.” He explained, impressed by his improvisation as it was far better than he thought.

He noticed that while this world had previously made significant technological advancements in the past, the civilization was in complete ruins after the nuclear war. Especially since infections broke out across the land, it was a miracle that humanity still existed.

The state of this wasteland after the fallout was rather strange. Highly advanced levitated cars existed simultaneously with internal combustion engine vehicles. While some advanced technology were preserved, the civilization undoubtedly regressed.

“Whatever.” Sun Jiao shrugged. With interest in her voice, she opened her mouth. “Now, let’s talk about my compensation.”

“What do you want to be paid in,” After a short pause, Jiang Chen asked. He was unsure what the currency was in this world.

“C-type battery, food, and crystals are all fine. Though personally, I prefer food.” Sun Jiao responded. Then with desire filled eyes, she asked, “Oh, do you have more of those curry chicken?”

“You finished them all.” Jiang Chen sighed with a fake heartbroken look. He has never even seen batteries or crystals before. So without a doubt, food would be the best choice.

“Oh, I am sorry,” Sun Jiao said with an awkward tone. All of a sudden, she turned back into her usual malicious character and forcefully stepped onto the armrest. Then she bargained, “salary will be ten cans of food per month. You are also responsible for my meals!”

Jiang Chen’s direct response made Sun Jiao guilty about her rather unreasonable demand. Although on this wasteland only fools had a conscience, conscience always existed inside people’s heart.

Cruelty was only a protective response for survival.

“I will be responsible for your safety.” Sun Jiao added as guilt overwhelmed her.

[No sh*t! If I die, who will pay you?] Jiang Chen responded viciously in his head. The compensation was nothing for him, but it would still cost him around one hundred dollars.

“Ok, my beautiful bodyguard, can you untie me now?” The crisis was finally alleviated as Jiang Chen finally let out a long sigh. His limbs almost losing all sense of feeling. Sun Jiao casually took out a dagger and sliced through the rope.

Jiang Chen moved a little as he stared at Sun Jiao with a sad look. Then, he went and picked up his empty backpack.

Sun Jiao forced an awkward smile and pretended that she never searched his bag.

“Get out? Why? This will be our temporary meeting location.”

Outside the window, the mega metropolis already lost its liveliness. The once crowded streets were now empty, without a soul in sight. The endless amount of zombies replaced what was once a vibrant city. The occasional howl and scream from unknown creatures also traversed through the dead city. Guns fired in the not so far off distance, mixed with barely audible noises. In the city permeated with death, familiar battles occurred every day. Zombies against humans, humans against humans…

Through the undusted stained window, Jiang Chen saw the danger, the death, and the opportunity of gold everywhere. 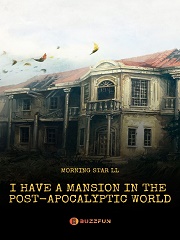