Chapter 1: From the depths of the grave

Han Shuo slowly opened his sore eyes after some time. His whole body ached, particularly his head. It felt as if he had a severe migraine and had had random things crammed into his brain.

Looking around, there were piles of eerily white bones messily scattered around the gloom. There was also strange black matter further inside the room that wafted a nauseous smell.

“Ah. So I’m really dead. This must be purgatory.”

Han Shuo’s heart turned to cold ashes when he realized he’d died at such a young age. Damn, he was unlucky! His past life had been a waste, better hurry and reincarnate to ensure his next life would turn out differently.

Han Shuo’s head started aching fiercely at the moment. After he clutched his head and wailed in pain for a while, he felt that he had learned many new things.

Half an hour later…

Han Shuo was dumbfounded. He thought that reincarnation into another’s body was the stuff of movies and dramas; how could it have happened to himself? And to take it one step further, he had reincarnated into a foreigner’s body. Had that old fart Chu Cang Lan made a mistake with his magic?

Han Shuo’s eyes had slowly adjusted to the darkness by now. He loosened his limbs and brought his right arm in front of his eyes. The black mole near his wrist was gone, and in its place were long, ominous scars crawling like worms up his arms. He shuddered, a cold feeling gripping his insides.

This body really wasn’t his. A gobsmacked Han Shuo realized he had really taken over someone else’s body…

Although Bryan was already dead, Han Shuo knew Bryan’s past for some reason. Han Shuo even knew that he had not reincarnated to the US or England, or any of the western countries. He was in a strange world named the Profound Continent, in an unfamiliar country called the Lancelot Empire. This was a strange land with swords and sorcery, one in which alien races ran rampant.

Bryan’s parents had p*ed away when he was young, and he was only ten years old when his uncles had sold him to a slave dealer. The slave dealer had sold Bryan in turn to the Babylon Academy of Magic and Force, and his life had been dark ever since.

Bryan had died when he was sixteen. He had been *igned to the weakest department within the Babylon Academy – necromancy.

In those 6 years, Bryan’s job was to *ist the students of the necromancy major, cleaning up the skeletons, corpses and other trash after a failed magical experiment. Aside from that, he was also in charge of random administrative tasks such as making tea, serving water, sweeping the floor and killing bugs.

And another thing, students majoring in necromancy would often use him as target practice to test the battle abilities of their latest experimental skeletons or wraiths, or try out necromancy magics directly on him.

The weak and cowardly Bryan had suffered through a living hell in the past six years. His body was covered with countless scars and bruises. Necromancy students would practice on Bryan whenever they lost a magic battle against the other majors, even if he was eating indigestible food or completing one of his endless tasks.

A 16 year old youth, six years of torment. How cruel was this for a child?

Bryan constantly thought of committing suicide. However, in his cowardice, he could not even find the courage to kill himself. And so he silently endured six years of torture.

Finally, on the previous day, a little witch called Lisa summoned a wraith and invaded his soul — killing him. Bryan felt no pain upon death, just the sad joy of release.

After moving corpses and broken skeleton bones for 6 years, another slave threw Bryan onto the same trash heap, the grave that he had constantly dumped trash into.

Han Shuo had felt his life was dark enough already, but when compared to Bryan, Han Shuo teared up a little. For the first time, he felt that he had lived a decent life.

Now that he understood what Bryan had gone through, Han Shuo’s voice choked up as he sighed, “How could such an insane, cowardly youth like you exist in this world? Bryan, what can I do for you now that I’ve occupied your body?”

Han Shuo suddenly sensed threads of what seemed like liquid in his body. His head ached at the same time as some memories abruptly surfaced. Threads of liquid slowly circulated his body as Han Shuo became lost in his train of thought. Much more knowledge had filled his mind, courtesy of that old fart Chu Cang Lan.

There were nine different levels in demonic magic, respectively known as the solid realm, the open p*ages realm, the molded spirit realm, the true demon realm, the blood*ing realm, the separate demon realm, the carnal realm, the nine changes realm and the omen realm. Demonic practitioners could do as they wish and kill who they wanted, completely disregarding all morals and ethics in the pursuit of absolute power.

Once a practitioner became a demon, he would have the abilities to move mountains and see all.

After sitting a while longer, Han Shuo felt that he had learned many things which were previously unthinkable. Of one thing he was certain, something had gone wrong with Chu Cang Lan’s last piece of magic. His own soul had disappeared, but had left all his knowledge and memories of magic to Han Shuo.

The thread of liquid moving in his body was the fundamental and incredibly vital magical yuan – the foundation for training one’s magical force. According to Chu Cang Lan’s memories, a demonic practitioner would have to spend at least three to five years to successfully cultivate magical yuan. Han Shuo had done nothing and knew nothing, yet he had that sliver of magical yuan floating around his body. Although it was pitifully weak, he knew that it truly was magical yuan.

Han Shuo’s thoughts turned to the crazy old Chu Cang Lan. He’d wanted to use Han Shuo as a scapegoat, but had ended up sending him to a strange time and place instead. All that random knowledge of how to train one’s magical force must have been left behind by that Chu Cang Lan.

Although Han Shuo had learned a bit about this strange world thanks to Bryan, his knowledge was greatly limited, as Bryan was just Babylon Academy’s lowly drudge. Han Shuo’s thoughts started racing as he considered the life ahead of him.

Bryan was dead, and Han Shuo was occupying his body. Han Shuo was now Bryan, and Bryan had been sold to a magical force school – this was an eternal identity brand. This strange world had cruel and harsh punishments for runaway slaves, so Han Shuo could not run. It was possible that he would not make it out and regardless, he didn’t even have a single copper coin on him.

After careful consideration, Han Shuo decided to return to the academy. Only there could he change his position as a slave and do something for the pitiful Bryan.

Han Shuo ached all over (Bryan had had a lot of old injuries before his death). Pain shot through his body as he attempted to stand up, so he hastily sat down after crying out, “Ow!”

Han Shuo felt no goodwill towards the Chu Cang Lan, who had forcibly kidnapped him here. Han Shuo knew nothing of Chu Cang Lan’s life or world, just that through the latter’s memories, one could strengthen his own body by training his magical force. With some advancement, one could travel in a blink of an eye or move mountains and shift oceans.

Although Han Shuo thought Chu Cang Lan was a bit off his rocker, Han Shuo was convinced of the legitimacy of his memories due to the fact that Chu Chan Lan had flown the two of them directly to the moon.

Feeling that he had nothing to lose, Han Shuo recalled the complex incantations needed to train his magical force. He concentrated according to the solid realm’s first principle and sought to control that weak hint of magical yuan.

Secretly delighted, Han Shuo thought that despite Chu Cang Lan’s eccentricities, the old man’s memories were useful. He started meditating again and began to cycle the magical yuan around his body according to the solid realm’s law.

Han Shuo only came to himself when his stomach started rumbling. He had no idea how long he’d meditated, just that his body’s pains had greatly receded and he had gained some new strength. He had seen results after only meditating for a short while. That old fart Chu Cang Lan had trained for who knew how long; no wonder he even dared to go to the moon. Han Shuo could only imagine how domineering the old fart had been when he was alive.

Han Shuo noticed something odd when he took a break from training – that sliver of magical yuan no longer orbited according to the solid realm’s law, but was actually circulating through the skin, muscles, bones and limbs of his entire body.

The aim of the solid realm was improvement of the physical body, an enhancement of muscles, skin and bone. Apart from slowly building up magical yuan in the solid realm, some fanatics would harm themselves in order to simultaneously build up their bodies and magical yuan. Simultaneous training yielded the fastest results.

“This method of training is basically a form of self-mutilation! Well, given that Bryan has always done similar things, maybe my progress in the solid realm will be faster when I return to the academy. Maybe it’s not so bad being this Bryan!”

Han Shuo reflected with appreciation and planned to immediately leave this place. He suddenly thought that it was really stupid of him to have stayed so long in the stink of the tomb; he could bear it no longer.

A faint light emitted from the top. According to Bryan’s memories, Han Shuo knew that there was a large cavern above him in which broken skeletons and corpses were thrown in. He ached all over when he stood up, covered with scars. Six years of torment had long since worn down Bryan’s body, not to mention his poor diet. As a result, he was malnourished and thin, and only one meter and sixty some centimeters.

Han Shuo stood on some moss and struggled to pull his weak body up. After a while and five or six falls, he finally emerged from the tomb. Han Shuo felt a deep joy to be alive again upon seeing the moon’s beams illuminating the earth and cascading across the cemetery.

Re*ured by the magical yuan still circulating through his body, Han Shuo thought positively that what hadn’t killed him made him stronger. And it wasn’t like he was without a hidden card. That Chu Cang Lan had left behind secret methods of training that could prove of some use, and help Han Shuo achieve dreams that he had never dared to dream before.

However, Han Shuo had no idea that the magical yuan Chu Cang Lan had left him would not only help him train, but was also a seed. This seed would change his thoughts as it changed his body. His mind was filled with evil thoughts before, but he hadn’t dared act upon them. The seed could prove to be his undoing, as it would prod Han Shuo into losing control of his own self. 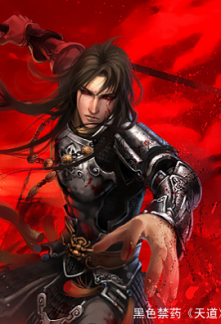 Chapter 1: From the depths of the grave