10 Depictions Of What Disney Princesses Should Have Actually Looked Like 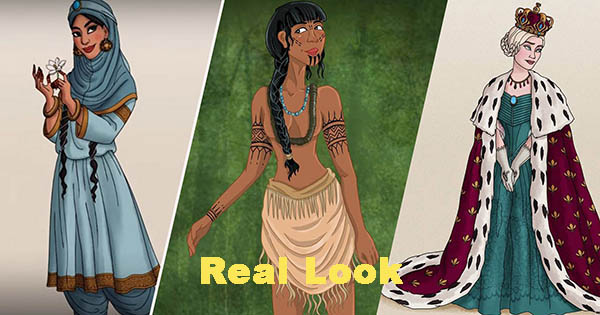 The Disney movies have done a great job of immortalizing some of the best stories in the world in a visual format. From Hans Christian Andersen's fairy tales to traditional folk classics, characters such as Cinderella, Mulan, and Moana, among others, have taken life in our imaginations thanks to these Disney animations.

But because some of these movies were adapted from stories from a specific cultural background, have you ever stopped to wonder if some of our favorite characters from these movies were accurately portrayed? Fortunately, there are people knowledgeable enough who have re-imagined some of these characters according to how they should have looked like. 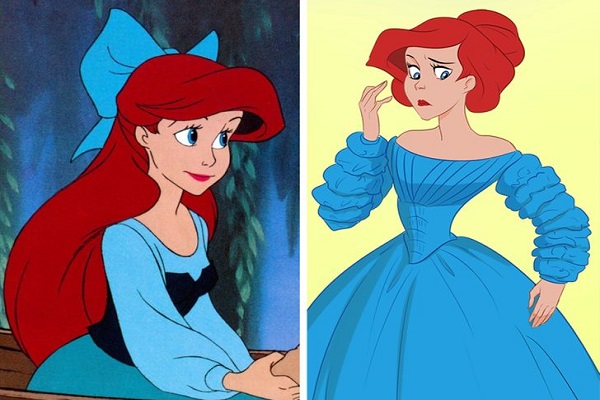 Since mermaids are mythical creatures, we'll have to focus on Ariel's human form. Hans Christian Andersen's The Little Mermaid came out close to the mid-1800s which would put the time period smack in the middle of the Victorian era. Ariel should have been wearing a dress with large puffy sleeves that were off-the-shoulder. 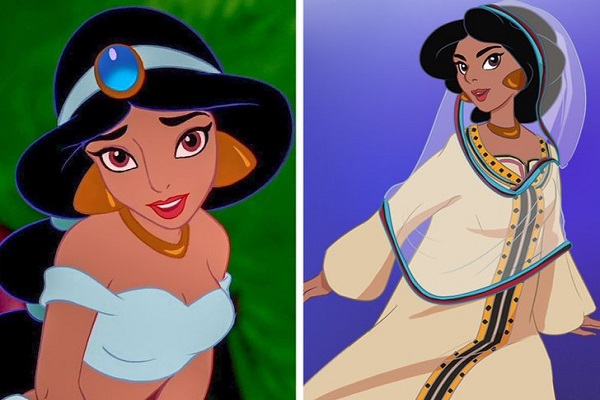 The story of Aladdin is part of the One Thousand and One Nights, also known as the Arabian Nights. It's a collection of folktales from the Middle East that were compiled during the Golden Age of Islam (roughly 800 to1350 AD). In the original tale, her name was actually Badroulbadour. However, that would have been a mouthful for an English film meant for kids so her name was changed to Jasmine.

Given the climate and cultural background, Jasmine would have worn modest clothing that was loose- fitting because of the desert environment. 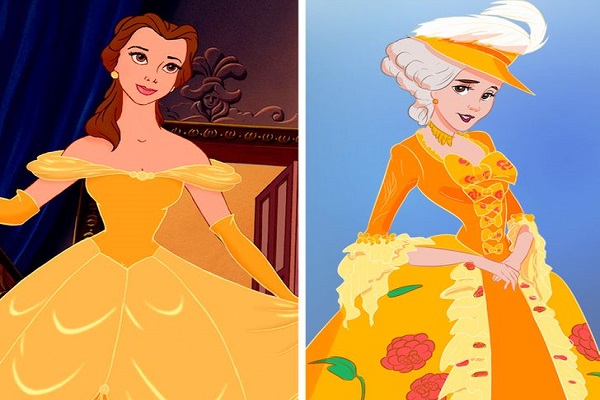 French novelist Gabrielle-Suzanne Barbot de Villeneuve published Beauty and the Beast in 1740. As such, Belle would have worn elaborate dresses fitted with feathers, flowers, ribbon, lace, and so on, as was the norm among French women of the time. 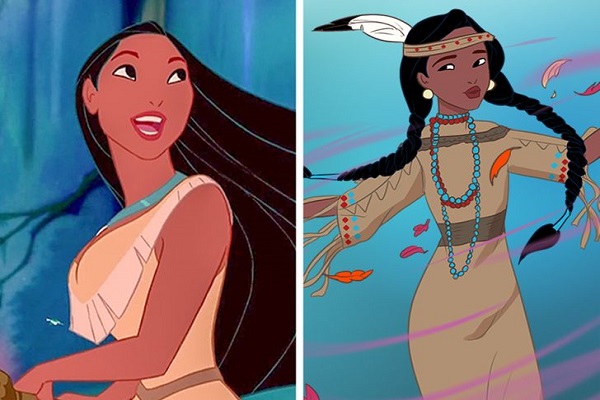 The character of Pocahontas is loosely based on Matoaka, the daughter of Chief Powhatan in the 17th century in what is now Virginia. At the time of her story, she was between 10 to 12 years old rather than the twenty-something in the Disney animation. She was the daughter of a chieftain so she would have had her hair braided and worn deer skins, tattoos, and beaded jewelry as befitted her status. 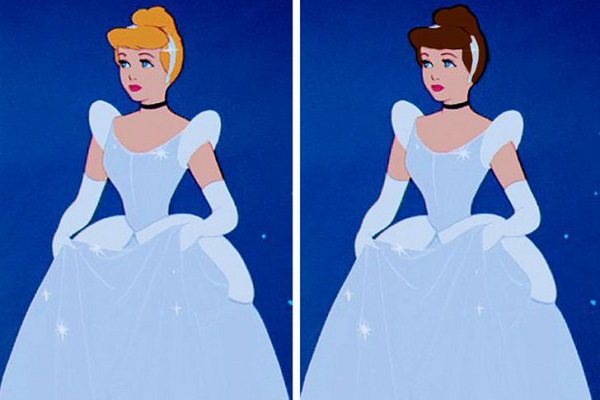 Cinderella has become a staple story of comeuppance against those who treat people unjustly. The Cinderella of popular culture takes place sometime in 18th century Europe. Cinderella is depicted with blonde hair but that hair color only became popular in the early 1800s.

Interestingly, the earliest versions of the Cinderella story can be traced back further into antiquity. Between 7 BC and 23 AD, there was a story told in Greece about a Greek slave girl who ended up marrying the king of Egypt. Another version of the story appeared in 860 AD in China where a girl named Ye Xian undergoes hardships similar to what Cinderella experienced. 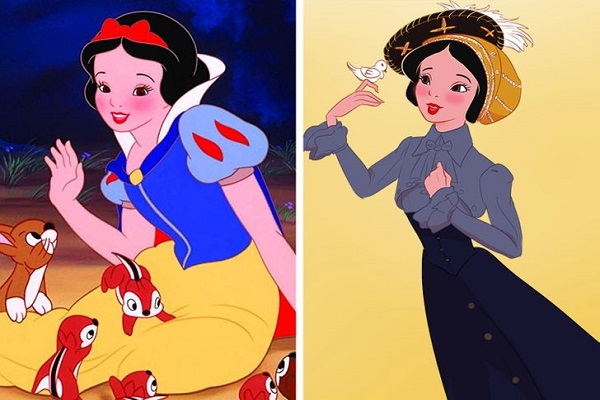 Snow White's story happens in 16th century Germany. This time period also saw the Protestant Reformation in that country. Conservative and modest clothing would have been the norm among women with dull color tones. The hair would not be allowed to fall down loosely and a headpiece would usually cover them. 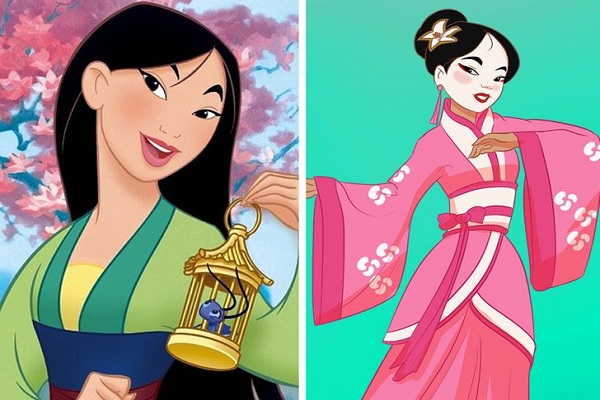 The women of the Northern Wei Dynasty would have worn more garish makeup like what you would see on geishas. The clothing of the time was more akin to Japanese kimonos (which were actually influenced by Chinese clothing). 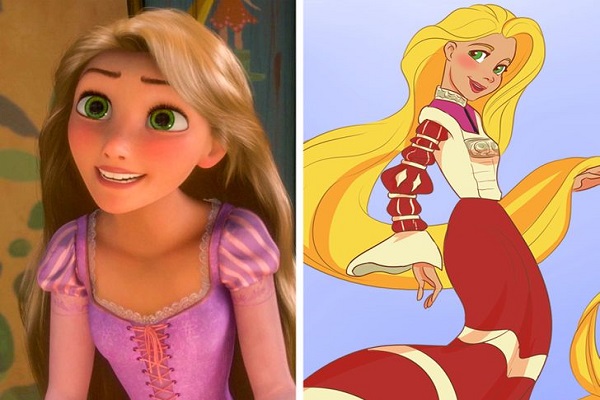 A lot of today's children's fairy tales come to us thanks to the Brothers Grimm. One of these tales included Rapunzel which came out in 1812. But the Brothers Grimm's version was adapted from a German tale by Friedrich Schulz who published his version in 1790.

As a woman living in Germany during the mid-16th century, Rapunzel would have been elegantly dressed in an outfit called a Cranach gown. She definitely would have looked more ladylike than how she was depicted in the animated film. 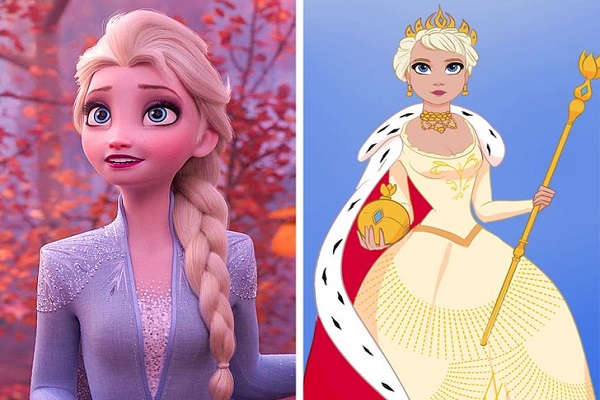 As a noblewoman in the mid-18th century, Elsa would have been decked in a gorgeous Victorian dress. Because she was also royalty, Elsa would have worn a more elegant cape than the one she had on her in the movie. 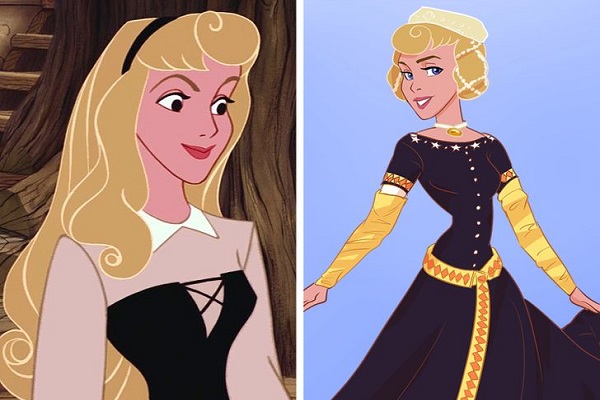 The earliest version of Sleeping Beauty appeared between 1330 to 1344 in Perceforest, a prose romance of anonymous authorship. French noblewomen of that era would have worn dresses that had tight-fitting bodices and sleeves. These dresses were called Cotehardie and were often buttoned down at the front.

It's really interesting to see all these famous characters as they should have looked if historical accuracy was accounted for. It gives a rare look into the cultural backdrops of the original stories although some of the garbs wouldn't have had as much impact. For example, Snow White wouldn't have been as compelling in a drab looking dress!